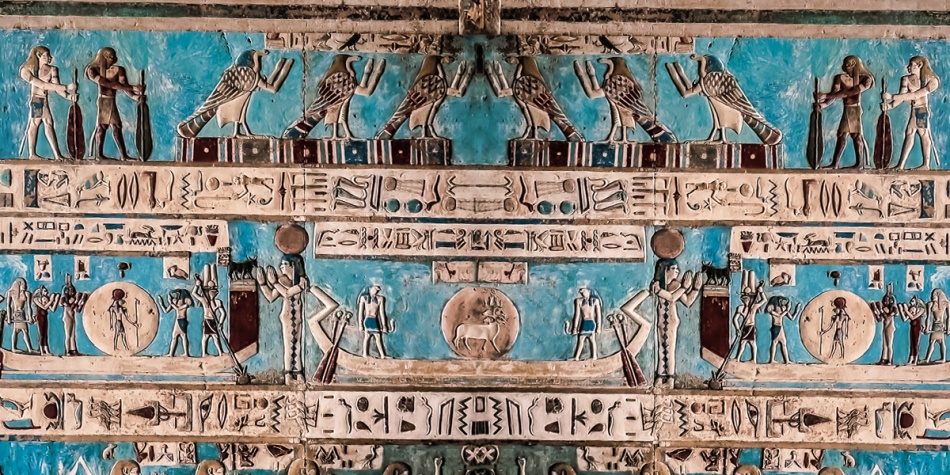 The instructions and materials to make some colour compounds do get lost over time. Egyptian blue is one of those colours that is lost to history to a degree. Blue was a rare colour to find in nature, but the ancient Egyptians valued the colour.

Egyptian blue was first manufactured around 2500 BC (the Fourth Dynasty of the Old Kingdom.) Egyptian blue represented the sky, the Nile river, creation, divinity and the universe. The colour was to dispel evil and bring prosperity. Egyptian blue was used outside of Egypt from Mesopotamia to the Roman empire. It was the first synthetic colour pigment in antiquity that was popular for many centuries. The colour was invented because lapis lazuli was too expensive to use. Most people sought to have blue beads because they believed they had magical protective qualities. The colour was used on sacred depictions of divinity, for instance, on Pharoah tombs, hieroglyphics on the walls, glazed funerary objects, decorative coffins, scarabs and sculptures of gods.

It also represented Gods associated with water like Nun, the god of chaotic water and Amun-Ra, the empire’s principal deity, was often depicted with blue skin and blue hair. Most gods often had the same hair and skin trait.

Egyptian blue was used on the nazar amulet, the evil eye, a part of protecting someone from violent energies associated with evil and the destructive power of envy. The talisman is similar to the Eye of Horus and is worn for protection and good health. These are glass beads in the hue of Egyptian blue with a white and black dot resembling an eye. It sometimes has a turquoise circle to represent the iris. It has also been made out of ceramics or clay. The phrase “an eye for an eye” comes from the wearers of this amulet. Based on the ideas of protective magic, the wearer is protected but the person who does something wrong against you would face bad luck. It is worn by people from many cultures from Greece, Italy, Egypt, Turkey, Spain, Romania, India, the Caribbean, the Middle East, Northern Africa and parts of North America. Due to the widespread symbol of the evil eye, blue became associated with warding off evil.

Another symbol that uses Egyptian blue is the Hand of Fatima, a palm-shaped talisman popular throughout Northern Africa, the Middle East, Tunisia and the Iberian Peninsula as jewelry and wall decoration. The amulet is also known as a hamsa. Fatima might have been the daughter of the Prophet Mohammed. The symbol is her open palm hand to embody inner balance, faith, and patience. Her fingers represent the five pillars of Islam: prayer, faith, Mecca pilgrimage, almsgiving and Ramadan fasting. The amulet is an open-handed palm painted in blue with equality-shaped thumbs and pinky fingers pointing outwards with three fingers pointing upwards. All of the fingers are close together in the shape of someone doing a stop sign. It has different meanings when the palm faces upwards bringing the wearer defence against evil while downwards would bring luck, and abundance.

The Romans first referred to the blue as Egyptian blue by calling iryt hsbd (artificial lapis lazuli) and the blue has caeruleum or Cerulean blue with caelum meaning heaven or sky. It was first mentioned in Roman literature by Vitruvius in the first century BC in De architectura wrote that caeruleum was made out of the materials of sand, copper (azurite and malachite), natron (sodium compounds) and lime. No recipe to make Egyptian blue was ever written anywhere in the times of antiquity, therefore, the original recipe is lost to history.

The chemical name for Egyptian blue is calcium copper sulphate. Scientists used materials available at the time like chalks, limestones, and copper minerals like malachite to recreate the blue colour. It was mixed and fired together at a high temperature between 950 to 1000 degrees Celsius to make the compound brittle and glassy. The compound was later grounded up and then refired between 850 to 950 degrees Celsius to produce the intense long-lasting versatile blue. The colour could be as dark as lapis lazuli or light as turquoise depending on the impurities found in the sands. If the blue compound was applied over a dark base, it could look like an electric blue. It was hard to make due to the precise temperature and oxygen needed.

When green or red light shines on Egyptian blue, it has infrared radiation. Egyptian blue emits a growing white with an infrared camera using visible induced luminescence. This means the blue is detectable without destruction because of the near-infrared radiation when using optical microscopy and Raman microspectroscopy.

The declining popularity of this blue was due to the easier availability of ultramarine or just lapis lazuli. Most painters like the natural blue of ultramarine more than the artificial blue. Some painters like L’Ortolano (Giovanni Battista Benvenuto) and Il Garofalo (Benvenuto Tisi) from 16th century Italy had paintings detecting Egyptian blue in their compositions centuries after the blue colour was conceived. But the colour has life in new technology like biomedicine, telecommunications, and laser technology. It could be used as a security ink to prevent forgery or in forensics as a dusting powder to detect fingerprints on surfaces on shiny or patterned surfaces. These possible applications for Egyptian blue are feasible because of the UV light from the colour compound.

Egyptian Streets – Egyptian Blue: A Hue That Made History

The Art Institute of Chicago – Egyptian Blue: The Mysterious Color in Mummy Portraits

BBC Culture – The strange power of the evil eye

Turkey Homes – The Blue Turkish Evil Eye (Nazar Amulet): Meaning and Should I Wear It?

The Peach Box – Hamsa Hand Meaning: Discover How To Wear The Hand of God